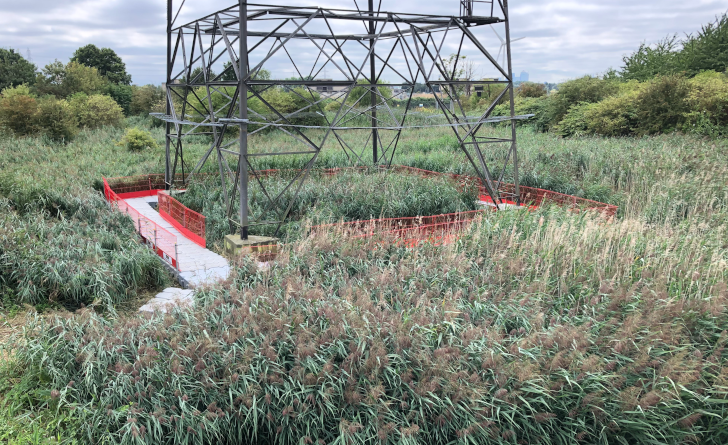 We were recently contacted by a client who required access an electricity pylon situated in the middle of a lake on a nature reserve in Barking, East London.

On paper what should have been a nice simple job, came with a number of hurdles that needed to be overcome to allow us to install the pontoons as required.

Being in the middle of a nature reserve, we were unable to simply pull up with a heavy haulage vehicle and drop the pontoons directly onto the water. The pontoons were unloaded in slabs of 7×2 metres approximately 500 metres from the final build location, from here they were broken down into smaller modules, they were then transfered onto dropside vehicles and ferried to a point approximately 100 yrds away from the pylon. After that it was all down to manpower, the pontoons were broken down into 2×1 metre sections and carried to the build location prior to being rebuilt, the same approach was taken with all equipment including our Combisafe edge protection and custom made stanchions.

Hurdle 2 – A rather overgrown lake

Having got all of the equipment to the build location we were met with our next challenge, an incredibly overgrown lake. A hot summer had prompted the reeds in the lake to flourish meaning that simply floating the pontoons into location was all but impossible due to how thick the reeds had become. Thankfully working alongside a devegetation team, working in waders and working from the pontoon, we were able to open up a route through the reads and complete the install. 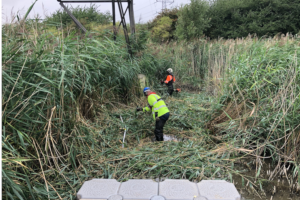 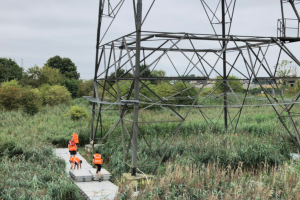 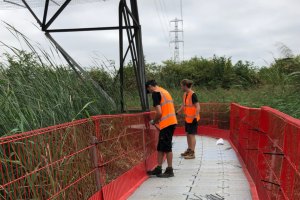 Having got the pontoon to site and the reads cleared we were able to complete the install and sign the pontoon over to the client just in time to allow them to get cracking on panting in the required timeframe.

The pontoon is being used  not only to access the pylon to repaint it but also to act as a safe means of rescue should it be required whilst the works are undertaken.