Last year we wrote a blog regarding the America’s Cup coming to Portsmouth and how we were involved by providing pontoons within the team basins in Portsmouth Historic Docks. These allowed for launching of the boats as well as access for the crews onto the boats ready for sailing.

This year we were again approached by Team Origin the event organisers of the 2015 and 2016 Louis Vuitton America’s Cup World Series to provide the pontoons within the naval yard however this time with an additional request. Would it be possible to install a 60 metre long walkway out to sea from Southsea sea front allowing the teams shore access after the racing had finished? In total well over 400 square metres of pontoon were required.

Our pontoons are the perfect solution for such purposes, when required on flat water they offer a solid stable work surface from which crews of people can work, however when installed at sea the design of the floats allow them to move and flex with the roll of the sea meaning the motion of the wave is absorbed by the pontoons rather than simply being battered side on as it would were it a solid structure.

The pontoons were delivered by an Articulated HIAB vehicle and unloaded alongside the esplanade in Southsea directly in front of the race village. The first section of pontoon was maneuvered into position and attached to the shore. Each section of pontoon measuring 2.5 x 7 metres in width was then fed onto the water floated and connected to this section until eventually it measured a total of 60 metres in length. 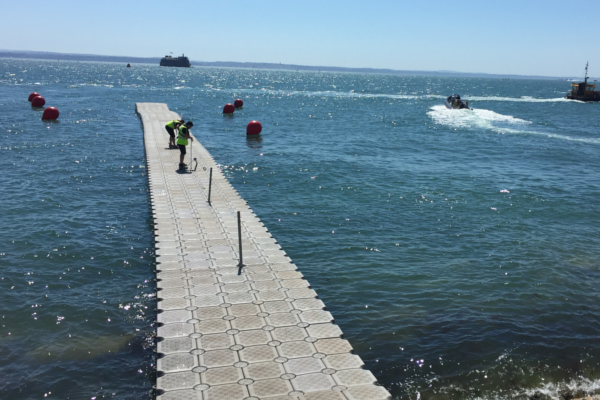 The pontoon was cross anchored along its length as well as being secured to the bank and a handrail was fitted down the middle to give people something to hold onto if required. Seeing as the only people to use the pontoon were the world’s best sailors we were pretty confident balance and staying dry weren’t going to be a problem. The pontoon worked perfectly and cut the time taken to get the crews ashore massively and allowed them to undertake media duties, prize giving’s, etc. much more promptly. The prize giving was all the more sweet given that it was Britain’s Ben Ainslie Racing Team who eventually went onto win the weekends sailing and put them 1 point ahead of Oracle Team USA in the overall standings! Take a look at our website by clicking here if you want to know more about how our pontoons can be used and what we might be able to do to help you.